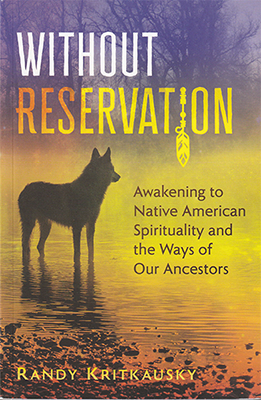 Without Reservation is a personal account of Randy Kritkausky’s search for his Native American ancestry and of his relationship with Mother Earth. It is a tale of self-discovery which weaves stories from an oppressed group with stories of a natural world that is also being treated appallingly. Randy’s search started later in life when he began to think more about his ancestors. The reader is given the privilege of going along with him on his journey, which contains such sadness as his mother’s death as well as the discovery of an artist with a talent for portraying Native Americans.

Randy was born in the United States and was bought up as a white American with European roots. His Native American roots were suppressed, as they had been for many people. The context of his journey, then, is the way in which Native Americans have been taken over by European settlers and encouraged to forget their native ways. One chapter, entitled Asa’s Indian School Story, tells of schools that were set up to teach Native Americans a different way of life – to make them forget their own ways and become just like white Europeans.

Other chapters tell of Randy’s discovery of the Native American way of life and how his ancestors fitted in with this. A lot of what he finds out are stories of oppression: of one group’s attack on another. In many places you can really feel his anger at the way the Native American people have been treated by the dominant white society.

This same anger comes through in the stories of how Mother Earth is being oppressed by the dominant society for the sake of its greed. The chapter entitled What Coy-Wolf Taught Me is a powerful description of how things have changed over time for the natural world from the perspective of the coy-wolf.

In the introduction the author describes himself as a somewhat lapsed fire-keeper rekindling connections and I think that is a great description of what this book does. It is an account of self-discovery that is tinged with justified sadness and anger.

Review Details: Without Reservation was reviewed by Karon Lyne for Indie Shaman magazine and published in Issue 46.

Buy on Amazon: We receive a small commission if you buy via the link below which helps with the costs of running this website. The link shows you the price for the print edition but will also give you options for the Kindle edition where available. (Please note – the link below will not show if you use an ad-blocker. Please disable your ad-blocker for this website if you would like to view).