The Shaman Within: Reclaiming our Rites of Passage 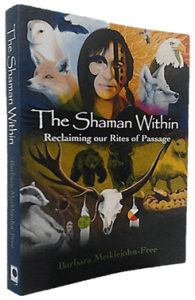 Barbara Meiklejohn-Free first became aware of Spirit when she was just three years old, seeing a Native American standing at the foot of her bed.

Later in life, after following her call to the US she would see his picture and be led to meet and work with Ed McGaa, ‘Eagle Man’ (who wrote the forward to The Shaman Within) and Wallace Black Elk.

Earlier in her life, at the age of 12, Barbara met a man called Swein MacDonald through a childhood friend.  Swein MacDonald, The Highland Seer, guided Barbara through learning about spirit, nature and the land, becoming her spiritual father, and when Swein passed from this life, he bestowed Barbara with the title Highland Seer.

In The Shaman Within: Reclaiming our Rites of Passage Barbara Meiklejohn-Free writes openly and honestly from the heart; beginning with the personal story of her call to go to Alburquerque with the following chapter returning to an earlier time in her life as an adopted child and her upbringing in the Highlands of Scotland.   Barbara, who is dyslexic, shares her difficulties as a child of nature with conforming to the expectations of society, school and adopted family, and the tale of her journey in search of self.

Each chapter in the book is named after a rite of passage and the appropriate pagan festival on the eightfold ritual pagan calendar and each ends with a rite of passage the reader can explore for themselves; these eight rites of passage supporting the soul for the journey from cradle to grave and beyond.

Illustrated by Yuri Leitch, The Shaman Within combines the ancient ways of Seership , Shamanism and Earth Wise traditions, sharing the author’s story to encourage readers to explore their own ancestors, spirituality and paths.

The Shaman Within was reviewed by June Kent, Editor of Indie Shaman Magazine