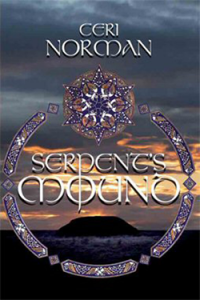 Having reviewed Ceri Norman’s first book Celtic Maidens for the winter 2010 edition of the Indie Shaman Magazine I was looking forward to reading her latest book, Serpent’s Mound.

Celtic Maidens was an excellent first book which inspired me to visit the wonderful landscape of the Preseli Mountains.   Serpent’s Mound demonstrates how Ceri has polished and refined her craft of storytelling with another engrossing tale which intertwines contemporary lives with ancient times and mythology.

Serpent’s Mound is inspired by the landscapes, history and folklore of East Anglia, and from the myths surrounding the many burial mounds around Britain including the well-known mound and treasures of Sutton Hoo.  One of the strengths of Ceri’s writing is her knowledge and detail of mythology and myth and this is certainly the case with Serpent’s Mound which contains a treasure of information about: Anglo Saxon mythology; ‘The Prose Edda’; Runes; the serpent in different mythologies and traditions including Saxon, Norse, Christian, Egyptian, and Celtic; and much more.

Serpent’s Mound also covers the complex issues surrounding archaeology and the removal of item for public display and information.  Ceri says she started to think about things from the point of view of the spectral warriors spied on the mounds and wondered how they would feel about archaeological investigations?

“Deep in East Anglia, land of Saxons and Serpents, close to the village of Wormford lies an ancient burial mound. Foolish mortals have robbed out the mound and awoken the Serpent within…

Melinda Matthews is having a very bad day. She has lost her job, found her man in bed with another woman and a tree has crushed her car. Just when she thinks it can’t get any worse she finds herself stuck in the middle of nowhere next to a haunted burial mound.  Here she finds herself caught up in an ancient conflict between two powerful adversaries”

… and makes some new friends, learning a lot along the way, in a diverse small community with some wonderfully developed characters.

Ceri is now, fortunately for us, working on her third novel.