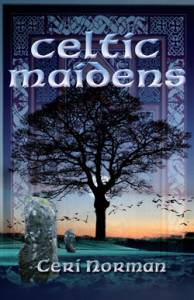 “Celtic Maidens tells the story of Siân Derwyn whose life holds few pleasures except for her friends, her interest in local folklore and the standing stones until the day that Ryan Ackley arrives in her remote Welsh village. Siân and Ryan are reincarnations of Celtic lovers who were slaughtered long ago. They are unaware that obsessive love, power struggles and murder have followed them down through the ages. Thwarted in ancient times, a murderous spirit has followed them through time and now, with them all reunited in the 21st century, he plans to fulfil his malevolent vendetta” …

Technically the blurb on the back of the book (above) is correct. However if you, like me, having read that were expecting just another gothic type romance you would be wrong. This book is much better than that.

Celtic Maidens intertwines a clever combination of landscape, ancient mythology and modern relationships as well as capturing the spirit of Druidry. Ceri Norman’s writing is both poetic and in ‘plain English’ making this book exceedingly readable and her well developed characters and plot make this book definitely a ‘page turner’ drawing you in to make connections with both the characters and the landscape. Indeed I would love to meet Ffi and see her totem/guardian animal artwork on the walls of the Merry Maidens Pub (you will have to read the book yourself to find out who I mean!).

Celtic Maidens ultimately has something for everyone whether you are interested in mystery of the ‘who done it’ variety, contemporary romance, ancient mythology and Celtic lore, stone circles, Druidry, or the combining of contemporary life with ancient spirituality.

Ceri says on her website that ‘Ultimately the tale was inspired by a trip deep into the Preseli Mountains, by the ancient monuments and the incredible atmosphere.’ Fortunately for us she has the bardic talent to pass on this inspiration in words with her wonderfully evocative descriptive prose, so much so in fact that I am already planning my visit to see this wonderful landscape with its ancient stone circles for myself.

Highly recommended reading. Celtic Maidens is Ceri Norman’s first published book and I look forward to the next.