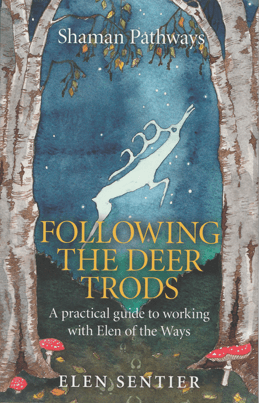 Following the Deer Trods, a practical book about the ancient British path of Elen of the Ways (the ancient shamanism of the British Isles), is written in author Elen Sentier’s inimitable down-to-earth style, expressively using the vernacular. Reading this book is like sharing a cosy chat around the fire with a wise, easily understandable friend who just so happens to be an awenydd herself; this skill having been in her family back through many generations.

Written as part of Moon Books’ Shaman Pathways series Following the Deer Trods begins with a brief explanation to the path of the awenydd in Britain, an introduction to Elen of the Ways* and an explanation of how she is still there, as in ancient times, waiting for us to notice and ask to work with her. These introductory chapters are followed by the main content of the book – a multitude of very useful exercises, journeys and practical techniques for the reader to engage in. These include: the three worlds/levels of the Otherworld, the four elements, the six-armed cross, journeying, familiar spirits, teachers, ancestors and deer folk. Methods of inducing trance including the usual drumming and the less usual such as the purring of cats!

Chock-full with unique information, Following the Deer Trods is very suitable for beginners as well as those wanting to expand their own knowledge by exploring new traditions and methods of working. So that pretty much covers a recommendation for everyone interested in British Shamanism!