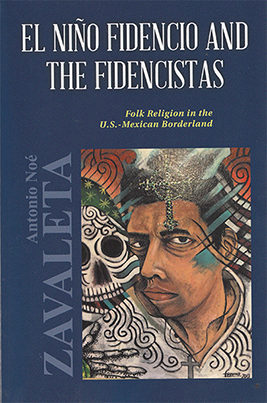 Early in the journey a family friend remarked to me “Oh, so you are going to study the ‘strong dream man’, he will come to you in your dreams and direct your work, pointing you in the right direction,” and so he has …[1]

El Niño Fidencio and the Fidencistas is a well-researched, long term study of the history of José Fidencio Sintora Constantino, known as El Niño Fidencio, with an exploration of the emergence of folk religion and the Mexican folk healing system, curanderismo, in the U.S.-Mexican borderland.

Author, Antonio Noé Zavaleta PhD, begins the book by relating his personal experiences in Texas during the 1950s, where he learned of Fidencio through the folk tales told by braceros (who had known Fidencio in life) around their camp fires on his grandparents’ farm in northern Mexico. Fidencio later appeared to the author in 1988, just prior to the 50th anniversary of his death, calling out “come to me, come to my fiesta”. Thus began a journey and 28 year study in which the Niño became a permanent part of Dr Zavaleta’s personal and professional life.

Niño Fidencio and the Fidencistas is an in-depth biographical ethnography (a scientific description of the culture of a society by someone who has lived in it); Dr Zavaleta’s lifetime of research supporting Mexican nationals living abroad earned him the prestigious Ohtli – a Nahuatl word meaning Pathfinder – award in 2009 from the Republic of Mexico. And in 2010 Zavaleta was appointed by President Obama to a Federal commission observing and evaluating on-going events within the United States-Mexico borderlands.

An authentic and authoritative work, El Niño Fidencio and the Fidencistas is highly informative reading for anyone interested in Mexican history and the tradition of the curanderismo.

Review Details: El Niño Fidencio and the Fidencistas was reviewed by June Kent, Editor of Indie Shaman magazine and published in Issue 35.