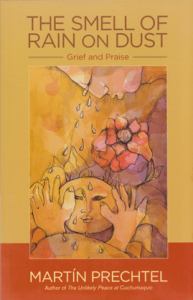 The Smell of Rain on Dust: Grief and Praise

The Smell of Rain on Dust is a beautiful book with poetical prose; humorous in places, inspirational throughout and containing a multitude of truths. Martín Prechtel’s “little book” was difficult for me to review. In part this was because I read the book through in two sittings (it would have been one had I not had to go and do something less interesting instead) and became so absorbed I totally forgot to take any notes after I got past the introduction. But mostly because it left me deep in thought, wanting to quote whole chunks of its content rather than provide an evaluation.

Pretchel was raised on a New Mexico reservation, moved to Guatemala as a young adult and served as shaman to the Tzutujil people of Lake Atitlan. The Smell of Rain on Dust weaves sacred indigenous wisdom in tackling the issues of grief and praise for as Pretchel states ““If there is ever to be any real peace on earth, all people need to relearn and re-establish the now diminished and hidden arts of Grief and Praise, for one without the other is not possible” [1].

Pretchel states in his introduction “This little book is meant as a companion of encouragement, a little extra light for those deep and noble parts of all of us and our cultures, who think they are too small, alone, unsupported, and unseen …” [2]. I would go further and say that The Smell of Rain on Dust is magical in the amount of inspiration it manages to share and provides a magnificent light that every reader and community could benefit from. Do read it!

The Smell of Rain on Dust was reviewed by June Kent, editor of Indie Shaman magazine and this review appeared in Issue 26.