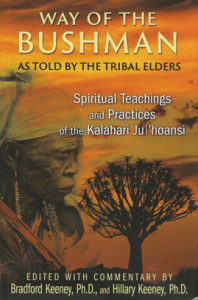 Way of the Bushman: Spiritual Teachings and Practices of the Kalahari Ju/’hoansi

Way of the Bushman offers a fascinating insight into the spiritual practices of the Ju/’hoansi (San) Bushman of southern Africa, as told by the tribal elders themselves.

Scientific evidence gathered by geneticists and anthropologists suggests that the Bushmen of southern Africa comprise the oldest living culture and theirs is a spirituality that dances with the divine, relying less on belief than on felt experience and being moved by a vibratory life force the bushman call n/om.

Way of the Bushman is remarkable, in that rather than providing an interpretation by the anthropologist, it brings teachings directly from the n/om-kxao (owners of n/om) themselves. The editors, Brad and Hillary Keeney, both danced with the Bushmen and were both regarded as n/om-kxao by the tribal elders.

Part one of the book contains the ‘Core Teachings’ as “People all over the world need to start dancing, singing, and receiving the nails and arrows of n/om … Each human being was created by the Mother God and Father God, and God’s family wants us to dance with them. It doesn’t matter if you are black or white or red, it doesn’t matter where you come from. We are all invited to come together in the dance that awakens n/om” [1].

In part two there are interviews with the elders telling stories from their own lives, ‘The Elders Speak: Remembrances’. The authors add very useful commentaries distributed throughout the book. And there is a dictionary appendix at the back plus a pronunciation guide at the front.

Way of the Bushman is highly recommended as a unique insight into an ancient wisdom, given directly from a culture at risk from the industrialisation of the modern world.

Way of the Bushman was reviewed by June Kent, editor of Indie Shaman magazine and this review appeared in Issue 26.