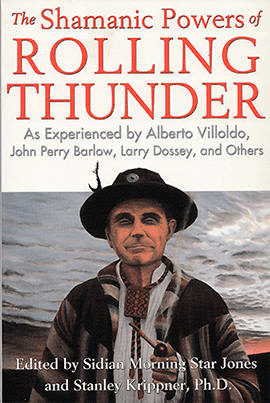 The Shamanic Powers of Rolling Thunder is an engrossing book containing 31 tales of personal experiences which give insight into, not just his work and life, but also into an extraordinary, complex and even contradictory man.

Both celebrated and controversial, Rolling Thunder was known for his healings as well as his ability to call on the forces of Nature, usually in the form of thunder clouds. He was also a passionate activist who worked to trigger change on behalf of Native American tribes.

Born John Pope, Rolling Thunder was raised on a reservation in Oklahoma. His mother was Caucasian and neither Rolling Thunder nor his children registered as Native American with the federal Bureau of Indian Affairs leading many people to doubt his Native authenticity. However despite the challenges he underwent as a result of his mixed-blood ancestry, Rolling Thunder had a vision – a community where people of different origins, races and nationalities could live together in respect and in harmony with Mother Earth. He believed “When it comes to medicine, nobody has a monopoly on knowledge”.

Edited by his grandson, Sidian Morning Star Jones, and well known author and professor of psychology, Stanley Krippner, The Shamanic Powers of Rolling Thunder is a captivating book relating the legacy and impact of Rolling Thunder, with a message that lives on long after his death.