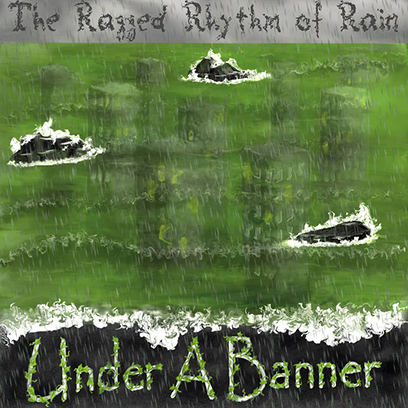 A fortunate Twitter puzzle over who was following who led me to discover Under A Banner and this is one of those cases of synchronicity you bless for its chance of a new discovery of sheer brilliance! Under A Banner’s songs are British urban folk reminiscent of, at times, Frank Turner or Billy Bragg, sometimes mixed with the Levellers. And in the best tradition of urban folk, Adam Broadhurt’s expressive lyrics tell tales of the ordinary person, using evocative acoustic melodies played mainly on guitar, alongside the great rhythmic beats of Jonathan Millington (listen out for the cajon!).

“When We Used to Dance” is a great introduction to the power of Adam’s lyrics. I’m not sure what inspired him personally to write it but if you want to dance an apology to the earth for the mess the human race has caused this is your tune! This track also features great fiddle playing by Jack Rowe (makes note to self to look up more from him also). “Some Stories” is poignant punk poetry in the tradition of Billy Bragg’s “Between the Wars” telling a story that lasts far beyond the length of the track about the extraordinary ordinary lives of ‘ordinary people’. The rhythmic rolling beats that introduce “Summer Skies” would make this track perfect travelling music – you can feel wheels turning to the beat alongside the rhythm of the guitar as ‘we leave the streets’. This track has a feel good factor with an edge. “This is England Now” starts with the sounds of a football game (probably being watched on TV with can in hand). A song about football, television, tribalism and unity with quips about the absurdity of modern life ‘So we look to stars and screen, we wish for lucky numbers ….’ Not forgetting of course the weather because ‘There is glory, glory in the sun and there is glory, glory in the rain’.

‘We have ways, they said, of making you stay’. Well they may do but I can hear those wheels turning again in “Highclear” and I’m off to where the mountain is ‘high and so clear’ as the ‘further away I get the clearer things become’. Wonderfully expressive lyrics! “Inseparable” is a poetic tale of love and loss with beautiful vocals alongside a perfect simple melody.   “Where’s Everybody Gone” is livelier again with an introduction reminiscent of the Levellers.   If you are feeling nostalgic look no further than “Another Time” to listen to as you reminisce then to cheer yourself up try “First Light”, a self-confessed drinking song with some wonderfully descriptive lyrics about driving into the city for a night on the town which lasts until you ‘see the first lights of tomorrow’.

“Sunburst” is a song about escapism although with Adam’s usual touch of realism he notices also ‘this was once under water …. before they built the mirrored office buildings like great accusing fingers pointing up towards the sun’.   You’ll still find yourself wanting to follow his call to go ‘Away to where the sun bursts over the horizon’.   Finally ‘raise your voice from the shadows’ to the melodic and stirring rallying call against oppression of “The Scream”.

Under A Banner aren’t into the more tawdry aspects of celebrity culture so I hope they get the massive success they deserve without having to encounter it!

Details and to Buy: For more information and to buy visit Under a Banner; Bandcamp; The Ragged Rhythm of Rain.

One thought on “The Ragged Rhythm of Rain”