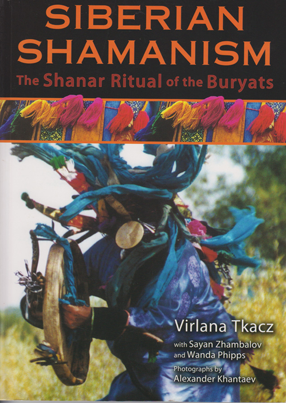 “Near the radiant blue waters of Lake Baikal, in the lands where Mongolia, Siberia, and China meet, live the Buryats, an indigenous people little known to the Western world. After seventy years of religious persecution by the Soviet government, they can now pursue their traditional spiritual practices, a unique blend of Tibetan Buddhism and shamanism. There are two distinct shamanic paths in the Buryat tradition: Black shamanism, which draws power from the earth, and White shamanism, which draws power from the sky. In the Buryat Aga region, Black and White shamans conduct rituals together, for the Buryats believe that they are the children of the Swan Mother, descendants of heaven who can unite both sides in harmony”.

Packed with stunningly beautiful vivid photography and documenting a complete Shanar, a dedication ceremony for a new shaman, Siberian Shamanism allows the reader an intimate glimpse into an ancient shamanic ritual of Siberia. The book follows Volodya Zhaltsapov through his personal initiation, carried out with the help of his ancestor’s spirits and the support of his community. “This is a ceremony of protection for the shaman and an offering the shaman brings to his ancestor spirits. If these spirits accept his offering and agree to protect him, he will become a more powerful shaman.”[1]

With chapters on the preparation for the ceremony including: ‘The Sacred Grounds’, ‘The Ritual Objects’, ‘The Cleansing’ and ‘The Offering’ as well as on ‘Calling the Spirits’; Siberian Shamanism incorporates wonderful translations of Buryat ceremonial songs and chants as well as being interlaced with ancient tales and legends about the shamans of the past. Interesting background information is also featured including stories from the anti-religion persecutions of the 1930 and 1950 Soviet era, when many shamans were shot or disappeared into the labour camps of northern Siberia.

Siberian Shamanism is a collaboration between: author Virlana Tkacz who has worked with Buryat artists since 1996; Sayan Zhambalov, a Buryat writer, actor and singer; Wanda Phipps who is a poet, translator and founding member of Yara Arts Group and photographer Alexander Khantaev. A foreword to the book is provided by Itzhak Beery.

Don’t skip the beginning of the book – there is a very informative ‘Foreword to Shanar’ by Dashinima Dugarov, Professor of Ethnography and Folklore at the Academy of Arts of Eastern Siberia in the Buryat Republic.

I can highly recommend Siberian Shamanism – remarkably spectacular photography and an extraordinary intimate insight into one of the world’s oldest shamanic traditions.