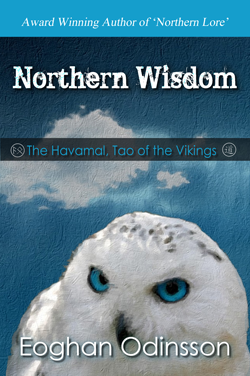 Northern Wisdom presents the ancient teachings of the Havamal in a contemporary form alongside an older translation, thereby making its message accessible and shedding light on the wisdom it contains.

Eoghan Odinsson begins by saying “I started this project simply because I wanted a modern language version of the Havamal suitable for easy reading” and in that aim he has certainly succeeded.   Eoghan primarily used four different translations: Bellows, Bray, Chisholm, and Hollander and used ‘crowd sourcing’ techniques to review the four translations side by side.  The Havamal is presented with the ‘old verse’ (Henry Adam Bellows’ translation) followed by the modernised interpretation and divided into chapters by subject and verse numbers.

Northern Wisdom begins with Old Northern Ethics For Life, an essay written circa 1900 by Patrick Lafcadio Hearn, for his Japanese students at the Tokyo Imperial University.  The date this essay was written is certainly worth bearing in mind, particularly if you are a female reader, as it is both presented to a male audience and contains some interesting assumptions about racial character “No Englishman believes in working from book learning … He suspects everything new, and dislikes it…”   In fact it may make you feel there is little point in reading further “On the subject of women there is not very much in the book beyond the usual caution in regard to wicked women …” but I do advise ignoring that particular advice in the essay and moving onto Eoghan’s A Modernized Havamal as it does indeed contain useful information for both genders!

The Havamal (“Sayings of the high one”) is a combination of different poems, presented as a single poem in the Poetic Edda and the only surviving source is contained within the 13th century Icelandic Codex Regius, thought to be from around 800 AD and derived from earlier oral tradition.  It contains advice for living and survival as well as relating the various charms and spells Odin knows.  In addition to a book of practical advice, the Havamal also contains the mythic “Rune Song” of Odin, which outlines seventeen magical spells.  Eoghan Odinsson also lists three runes, with diagrams of each, as mentioned in Freya Aswynn’s book “Northern Mysteries and Magick: Runes & Feminine Powers” making this a very useful resource indeed.

Eoghan Odinsson’s, Northern Wisdom The Havamal, Tao of the North, is a book well worth owning whether you want to study the Havamal and consider your own translations, enjoy reading the ancient Northern verses, or simply dip into the book for an authentic rune spell.

Review Details: Northern Wisdom: The Havamal, Tao of the North was reviewed by June Kent, editor of Indie Shaman magazine.

Buy on Amazon: We receive a small commission if you buy via the link below which helps with the costs of running this website. The link shows you the price for the print edition but will also give you options for the Kindle edition where available. (Please note – the link below will not show if you use an ad-blocker. Please disable your ad-blocker for this website if you would like to view).