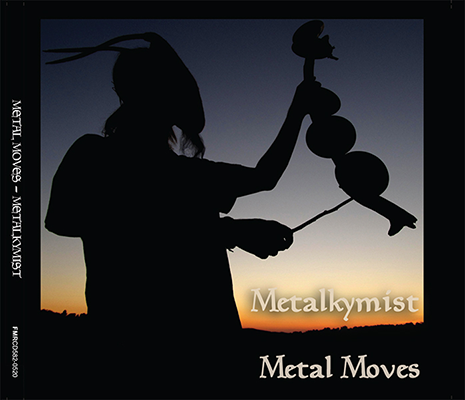 Metalkymist, Steve Hubback’s new and 4th Metal Moves CD, was released in the autumn of 2020 by FMR Records, a British record label founded in 1987 which specialises in jazz and improvised music.

Hubback is both percussionist and composer, as well as the creator of the gongs, cymbals and unique sculptures that he plays alongside drums creating a compelling and highly unique immersive soundscapes.

Title tune, Metalkymist is complex yet uses simple sounds from a variety of drums and chimes. The second track, The Animal Sorcerer opens with rowdy dark drumming which is later joined by quick footed chimes. The next track, Medovina is followed by a short traditional Breton work, Son Ar Christr then one of my favourites, the very atmospheric The Bee Priestess. The beats of At the Forges were indeed very reminiscent of a blacksmith’s work although the smith it brought to my mind was making chimes in the world of faerie. The next track In the Ruins tells the story almost visually and would make an excellent soundtrack for e.g. a film or computer game on the same theme; melodic, dainty … tiptoe into the ruins because who knows what you’ll find! The penultimate track Going through the Mirror was another of my favourites; opening with a very rhythmic drum which got me moving and joined by a swelling of sound, it would be excellent for trance and dance. And final track Athanor is a short impro back out into whatever you were doing before you put the CD on.

If you like music that tells a story; that’s a bit different, very individual yet professionally produced; and that engulfs you in the resonance of the moment then you can find out more about Metalkymist on Steve Hubback’s website and order direct from the record label at FMR Records.

Review Details: Metalkymist was reviewed by June Kent, editor of Indie Shaman magazine and this review was  published in Issue 47.